OwyheeStar (pronounced Oh - Y - He - Star) located on a small farm in far Eastern Oregon next to the Idaho border is rural by any definition. The Nielsens and their Weims live a little south of Ontario, Oregon (in Malheur County).  (The Snake River forms the border between Idaho and Oregon (except in one small area known as Big Bend). The south end of the Nielsen's farm is a long stone throw from the Snake River.

OwyheeStar is owned and operated by Cliff and Shela Nielsen. They have resided on the family farm for most of their lives. For Cliff, this amounts to 60-plus years. Cliff grew up on this farm; his family moved there just before his first birthday. Once he and Shela were married (in 1969), they built a home on a corner of the property. In 2016, Cliff and Shela moved into the original farmhouse--they have been doing an extensive remodel ever since.

The Nielsen farm is a small working hobby farm but makes a perfect place for them to live, raise beloved Weimaraner, and to train the Weimaraner. On the southeast corner of their land, you will find an unfarmed area. This natural treed habitat was developed as well as designated for bird-cover. We call it the Three Cliff's Sanctuary--named after the developers--Cliff, his father Cliff, Sr, and his father's twin brother Uncle Clifton. Uncle Clifton was the first to raise and celebrate the Weimaraner--giving Cliff his first Weim about sixty years ago.

The sanctuary area sees a lot of use--they use it for family picnics. It also makes the perfect place for the young pups to explore.  Their Discovery and Placement test most usually takes place in this area--the puppies love it. Near the middle of the approximately 40 acres of farmland, there is a small seasonal farm pond. It gets used for swimming pups as well as for the adult Weimaraner. The land is prime row-crop, however; Cliff grows alfalfa exclusive--with one exception, that of the very occasional rotation crop. 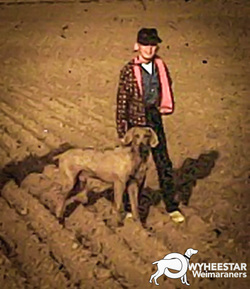 Childhood Memories are not soon forgotten!

Cliff's love affair with the Weimaraner goes back more than sixty years. This love first took root when uncle Clifton raised a litter of Weims (near Othello, WA) during the l950's. Being a good uncle, he gifted Cliff with his first Weimaraner--Doc. Here we see a photo of Cliff and Doc.

It was many years later when Cliff and Shela acquired their first Weimaraner. They were both found their hearts captivated by the breed. There was no turning back. After having raised the Labrador for most of their married life (more than 25 years), they soon found room only for the Weimaraner. Many years later, they count it an honor to share this love with a few select persons.

Cliff hunt trains for himself and (these days) rarely will consider training for others. He is actively involved with the Treasure Valley North American Hunting Dog Association (NAVHDA) hunt club, as well as the International NAVHDA. Training the Versatile Hunting Weimaraner can be challenging, but Cliff finds it fun as well as rewarding.

The Versatile Weimaraner Appeals to Hunter and Non-Hunter alike

The Weimaraner is a family dog. It loves its home and its humans. Puppy-biting is often the bane of new puppy owners, as well as a problem for those with active young children. The Weimaraner will feed off of their energy, and at times this can be a bad thing. Regardless, more often than not, the children become close with their beloved Weimaraner. Many sleep together, play together and create memories that last a lifetime. Click Here to learn more about the puppy biting issue.