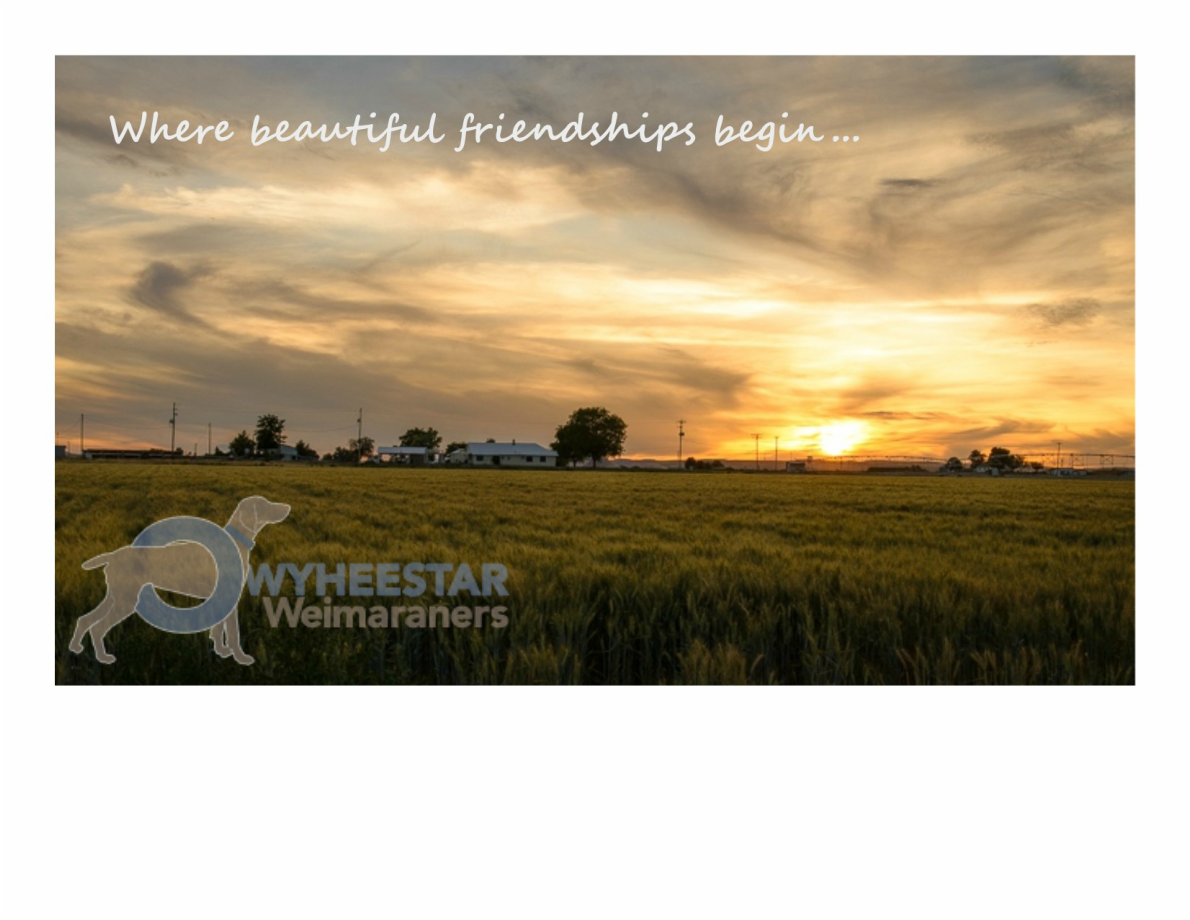 How Do you Pronounce OwyheeStar?
Oh - Why - He - Star

Please Note: You will need to send a direct email request to Shela (shela@owyheestar.com) to get the application link.
Beginnings

It has been our privilege and honor to raise the Weimaraner exclusively for more than two decades. Cliff's earliest Weimaraner experience happened right here at the Old Farmhouse. It began when his Uncle Clifton (who was breeding the Weimaraner in Central Washington State) gifted him his first--after WWII in the 50s. What else can we say? He was infected with the love of the breed at a young age--around 9-years-old.

You are either a Weimaraner person or not. It seems there is little-to-no middle-ground when it comes to this breed. The folks infected with the addiction, appear to be mostly exclusive to the Weimaraner. The Weimar-virus may well be contagious. By all appearances, it spreads to your friends, neighbors, and other family members. Or at least the idea of having one does.

Nonetheless, they (the Weimar in general) certainly is not for everyone. Neither are they a leave-in-the-backyard dog. Our beloved breed is one who doesn't take well to being left behind. For this reason, many Weims suffer from severe separation anxiety. This anxiety can present in a myriad of ways.  Some Weimaraners exhibit their frustration, fear, or emotional distress in ways that all too often end badly--dumped at a shelter, passed along to another unaware person. These are scenarios, we at OwyheeStar strive to avoid.

Despite the challenge of raising the Weimaraner puppy, many people succeed. Once they are raised, it may be possible to trust the Weimaraner to run-free around the home and yard. It doesn't always happen. Honestly, there are so many ways to get into trouble with this breed--we will not even try to list them here. Every year too many Weims find themselves being re-homed. The reason these pups end up being returned to their breeder, dumped at a shelter, or handed off to the rescue organization is more often than not, a misunderstanding about the breed. The Weimaraner presents their new family (or owner) with unexpected challenges. The dividends for working through the ups-and-downs are enormous, but not everyone is able or willing to invest what it requires.

You may be researching this breed. Possibly you are already love the Weimaraner. Whatever has brought you to our website, we welcome you. We sincerely hope you find some answers--the right answers. We have a lot of public information that should help you with your decisions. You may want to sign up for our blog--Click Here. The OwyheeStar Weimaraner's News Blog is a mix of posts: OwyheeStar puppy updates, educational posts, and other breed-related information. At the top of the blog, there are links to pages that talk about the breed, OwyheeStar, our process and policies, and us (the breeders--Cliff and Shela Nielsen).

The Weimaraner breed originated in Germany. It was the Court of Weimar Nobility who propagated the Weimaraner around the 15th century. These noblemen took pride in developing a dog that held all the prized qualities they deemed desirable--speed, scenting ability, courage, and intelligence. Of course, these high-ranking members of the royal family were using them to hunt large game animals such as wildcats, wolves, deer, etc. The advent of the 20th century brought a decline in the big game. In light of the change, the Weimaraner became a different kind of hunter-- a bird-dog. Typically, we refer to them as a versatile hunter. The Versatile Hunter Designation means they are expected to hold a point, retrieve upland game birds as well as waterfowl. Small game like rabbits and such are likewise considered Weimaraner worthy.

Originally reserved for the nobility, and a few favored others (until very recently) the Weimaraner was beyond the average person's reach. It was difficult, if not impossible, to acquire a Weimaraner--both in Germany, and America. The Breed Club was the salvation of the Weimaraner so to speak. Recently, the Weimaraner has seen a rise in popularity. Nevertheless, it is still hard to find a quality bred Weimaraner.

​The 21st century continues to see change--for everyone including the Weimaraner. Historically families used to be more closely connected to the land, and the environment as a whole. Hunting once deemed a right passage for younger family members is not as common. Today, the vast majority of the Weimaraners raised in America find homes with non-hunters. Just as the 19th century saw the shift from large game hunts to birds (and smaller prey), we see a move away from hunting. Many who are hunters are of the casual type--hunting a few times a year. Groups like the  North American Versatile Hunting Dog Association (NAVHDA), help those dedicated to the Weimaraner and other sporting breeds hone their skills.

​OwyheeStar Weimaraner is our passion. We have been working to develop a well-balanced all-around Weimaraner; however, we feel it is important to be true to the breed. We are interested in retaining the natural hunt instinct. Cliff works toward developing hunters, training them and hunt testing them. He is associated with NAVHDA (Treasure Valley as well as the Internation Chapters)--on occasion, he will participate in an AKC event. Some OwyheeStar Clients have participated in noteworthy events--including the show-ring. Agility, Rally, Nose Work, and even the Trick Dog Competition titles were earned, and some also earned their Therapy Dog Certification. Another person is working toward their Search and Rescue Certification. You can see the Weimaraner is versatile in other sports besides hunting.

​Every OwyheeStar puppy deserves the best possible home--it is our primary concern. We evaluate and match our pups to their future family/or person using our application process. One of our primary goals is to ensure the prospective puppy homes are right for this breed. There are other considerations as well, but ultimately, we are looking for like-minded people. We require the OwyheeStar puppy to be returned to us in the event they are no longer wanted, or cannot be retained. Therefore, we do not take this process lightly on any level. We are first and foremost interested in each pup's welfare. The application is available by request only. We are often unable to predict when a puppy will be available.